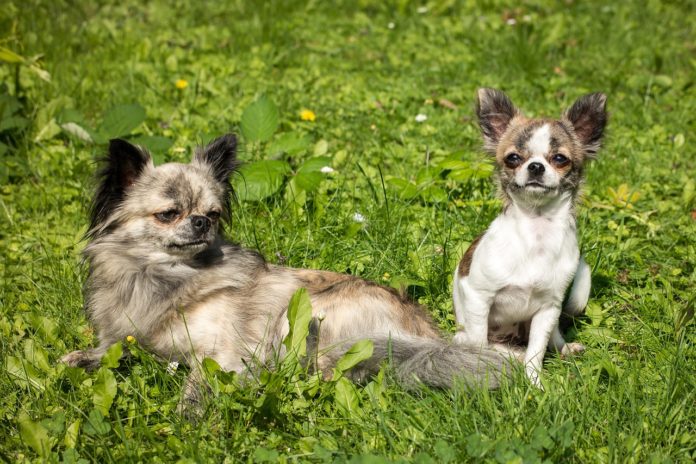 The Guide and Advices for the Fertility and Pairing of Chihuahua.

The coupling of the Chihuahua is not a simple thing. Better to be prepared for how to act and what to do at the appropriate time, so that everything goes in the best way.

As for all dogs it is necessary to check when the female is in estrus, the fertile period, which runs from the 9th to the 14th day of the appearance of bleed loss. In this time frame, at least a couple of meetings between the two Chihuahuas should be provided for a greater probability of fertilization.

It is advisable, even before the estrus, to bring the two dogs together and to check if the female is will accept, and prevent problems that could lead to an outright refusal.
If possible it is better to take the female to the male, so the dog feels at ease and it is able to play its role with the necessary decision.

The environment in which they meet will have to be quiet, without other presences (especially if there are other animals in the house), better that there are only the two dogs and their owners.

It may seem unnatural but in order for the Chihuahua pair to be successful and without any problems we need the help of the owners or someone of them. At the moment of the breeding, in fact, it will be better to keep the female from the head and to avoid the turning, where she can bite the male.

Which generally does not happen if the two dogs already know each other. In other cases the presence of the owner will serve to calm the dog.

After the first phase of the coupling, which lasts a few minutes, the male will descend from the female and the two dogs will remain attached, tail against tail.

It is time for the owners to keep them still so that the passage of the seminal fluid takes place without any trauma. Normally it takes about 20 minutes, but it can happen that dogs stay tied even longer.

The important thing is to wait for the posting to take place naturally without forcing. It may in fact happen, that the female, wanting to free herself of forced immobility, can create traumas to the male.

This is why it is important to have a person who keeps her calm, as well as the male.
In fact it can happen that the dog has not been able to perfectly insert the nodes of the penis that keeps it hooked to the female and it can escape before the coupling is finished, thus nullifying the process.

After the first pairing, it is good practice to follow another one after 3 days, but not before, in order to give the sperms the maximum vitality.

It is good to write down the days of mating so to calculate the date of delivery or the eventual cesarean section, to which the Chihuahuas are often subjected due to the major problems of these dogs, as compared to other races.

Finally, if you want to have puppies, you must also consider the age of the female. Better not to exceed 5 years because, in addition to the difficulty of conception, there may be problems before and after the birth.

Agility and intelligence exercises for Chihuahua

Intelligence and agility exercises for Chihuahua 2

The Character and the characteristics of Chihuahua

Lullaby – Songs to let our Chihuahuas relax and sleep.