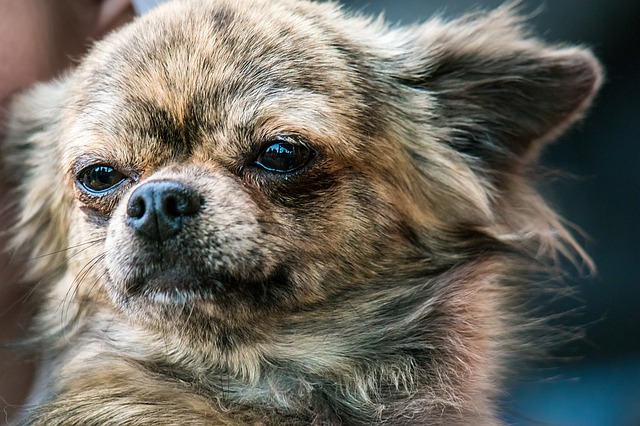 How to deal with an aggressive Chihuahua.

“A Barking dog does not bite” is a saying that, in the end, I believe it has never convinced anyone!
Too often, unfortunately, happens to have dogs with aggression problems, this is not normal and it is rare, and it depends only on a character factor. In fact, usually the causes are to be associated with a dog’s stress, his lack of serenity or even with a simply one from a wrong education.

Obviously, with aggression one does not mean, for example, the dog that turns around and try to bite the vet or an operator who is making a painful intervention; in that case we can justify it with “self-defense”.

The real aggression is really found with other dogs, with people and sometimes even with their owner. These problems with Chihuahuas are often underestimated, since it is a small dog, if not tiny, and seems not to be able to harm others; but the problem cannot be attributed solely to this, but also to his mental well-being.

A dog that responds to various stimuli with anger means that he does not know how to behave otherwise, or that he has been led to think that this is the most appropriate answer.

Usually these problems arise because there is a flaw in the dog’s relationship with the owner and this can be hidden in each of our small daily action, and also in our body language that can be translated into “bad dog” in a different way from what we mean.

Who can you contact in case of an aggressive Chihuahua dog?

This is why in order to correct and improve your relationship, your lives and your happiness, it is good to contact a specialized veterinarian, a real specialist for dogs that will find the problem at the origin and can also help you with simple exercises. The ethologist is a graduate figure who professionally studies man, animals and the ways in which they interact with the environment and with each other.

There are also some figures, such as dog trainers, who, however relying on the advice of a veterinarian who specializes in behavior, can help you try to solve the problem. But be careful because even in this field is full of impostors who pretend to be professionals but who are anything but professional.

Unfortunately, in recent years it is thought that the dog trainer is a job that does not require studies or courses and so it often happens that people decide to call themselves such a professional without having ever taken a certification or have even been informed on the subject; careful to these subjects that could simply worsen the situation that perhaps was already delicate.

I would add that aggression problems must be dealt with immediately, without waiting too long, and waiting to see how it evolves, because we risk that then the problem will be much harder to eradicate. 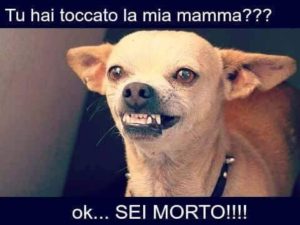 How to behave with an aggressive Chihuahua dog.

Having said that, since I am not a professional specialized in animal behavior, I will only be able to give you some advice formulated by the experience and the basic study: we assume that you will get many more results with positive reinforcement rather than with the negative one.

An example may be the dog who cries when we are sitting at the table eating because he wants what you have in your plate; never go along with it!
If you give in to his sweet little face, just a few times and a few bites, and he will understand that crying will have the power to make you do something and the problem will get worse.

Probably every day when you sit down at the table he will be there, he will cry louder and louder and if you do not feed him he may come to extreme, and sometimes aggressive, reactions .

This discourse is applicable to a thousand other situations such as getting on bed and sofas, climbing up your arms, entering or leaving a room, … so before you allow anything, you must be clear about the habits you want to take to your Chihuahua and do not ever satisfy him when he cries! Wait rather than calm down and then allow him what he wants. 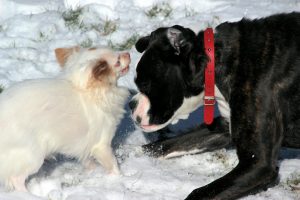 How to educate a Chihuahua to socialize with other dogs.

Absolutely avoid taking the Chihuahua in your arms when you meet other dogs; of course than if the other dog  is going to tear your dog is more than legitimate that you need to take it in your arms!

But if you are in doubt about the fact that the dog that is coming towards you is not really friendly, then you change the road, and go around, or change the sidewalk. In these situations it is also very important our state of mind and our body language: if we get stiff, and we begin to tighten the leash, then we let him believe in general that we are on alert, we also pay attention to our little friend who might think he has to attack the threat that scares us so much.

Remember, however, always to make it socialize with other dogs, especially when it is a puppy, because it will teach him to behave with subjects of the same species. Also at this stage it is very important to socialize it with people of all ages: the elderly, adults and children, men and women. If this is not done, it is likely that when you present a child to the dog, for example, this recognizes him as a threat and tries to attack him.

I recommend, never underestimate the psychological situation of your dog, and never ignore the signs that sends us daily, also never to comply with his aggressive behavior by supporting, justifying or caressing him while he has these demonstrations. However my biggest advice is to contact a specialized person that will surely help you.

Jenny, the homeless Chihuahua who just wanted some love.

Traveling by car with our Chihuahua, Guide and Advices.

Prevention and Treatment of parasites Chihuahua, Guide and Advices.

The Health of Chihuahua, Guide and Advices.